Happy Birthday to my sister Kim, your card is on my hall table!
SKIPPING ROPE
One of the extra things I have started this week is to introduce exercise into my regime. I started with a skipping rope in the back yard but found it hard going. I like the idea of using this device but I don't think I'm quite ready for it yet.
BALLS REVEALED
Okay, so I failed on the skipping rope task, but I will get back to it in a week or so when I've lost a few more pounds. In the meantime, I have taken up a special exercise program that I devised a couple of years ago. It is a latchkey regime which means that I can do as little or as much as I feel able to do at any given time. The idea is, (1) you purchase a set of those soft tennis ball sized plastic balls that you can buy in a bundle of fifty or a hundred for a pocket money price from your local toy shop. (2) You count out thirty six balls and place them in a bucket or basket. (3) You throw the balls onto the floor. (4) You then start to pick up the thrown balls and put them back in the bucket or basket. (5) You throw the balls on the floor again and pick them all up again. Phew! I think you probably get the idea now!
MINT TEA
Now this is a good one! I divide my day into two halves, during the hours of daylight, I drink black coffee. After dark in the evenings I drink Mint tea. When I say this is good, it must be, 'cos I hardly ever drink tea, however, over the last couple of weeks the mint tea has become an important tool in my quest to lose the weight first and then go on the diet! The amazing thing I discovered was that when you drink this stuff, you don't feel hungry! So, it's ideal for me, as after seven pm, I don't eat again till seven am. when I break my fast.
WATER TRICKS
The water tricks are probably the single most important thing I have learnt. As you should know, you need to drink lots of water just to stay alive! But when you're losing weight, it is essential! You need the water to help flush out your system, your kidneys etc. If you don't drink the water, you die! I'm not being alarmist here, you see you can go without food for a long time but not without water. I drink a minimum of four pints each day and the way I do it, is two pints first thing in the morning and another two pints in the afternoon about an hour or so before I eat.
I also try to drink other amounts of water throughout the day and if I have to drive anywhere I always take a litre bottle with me.
THE COLD WATER TRICK
I mentioned that I drink black coffee and mint tea but being used to having milk in the top of my coffee I now put a little cold water on top instead. I don't suppose it makes much difference really as the coffee soon cools enough to drink anyway, but it's just one of those things I do so I can drink it straight away.
THE HOT WATER TRICK
I drink my (four) pints of water from a beer (pint pot) glass which I fill up about two thirds of the way with freshly drawn very cold water and then I top up the glass with boiling water and drink it down in one go. I find the temperature, doing it this way to be just right.
MORE IN A FORTNIGHT...

Posted by Andy Sewina at 4:12 pm No comments: 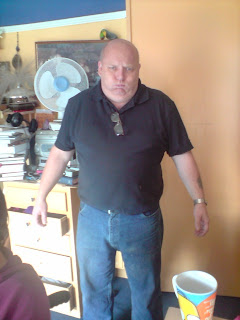 Photo Copyright Brigitte Greenham (c) 2008
Official photographer to the stars...
FAT PHOTO
Okay, here it is the official 'Fat Photo' the only trouble is that it doesn't look fat enough, but believe me, this photo was taken on October 2nd 2008 when I was thirty-six bags of sugar overweight. Each bag represents 2lb in weight. Therefore, I started this weight loss program a whooping seventy-two pounds oversize. The target I have set myself is to lose this excess by Christmas eve! How mad's that?

When I say don’t try this diet at home, I mean it. This quick weight loss method is for seriously overweight people. If you only need to lose a few pounds, I suggest that you watch your portion sizes and join a gym.

This method of reducing is so powerful that you often need to force yourself to eat. If you are a gasper, things become potentially more dangerous as you are likely to substitute eating for a cigarette.

The way this rapid reduction takes place is by eating high protein foods; the idea is for you to eat as much and as often as you feel the need for food. You won’t put on any more weight, in fact the more high protein you eat, the faster you will reduce.

The thing is, if you’re seriously overweight, you’re already carrying around tens of pounds of unused energy. The high proteins that you eat start to go to work on this fat store immediately. After only a few days your bowel movements will change and your stomach will shrink and in the process you will lose maybe six to ten pounds of excess weight, perhaps more.

Now that’s what I call quick weight loss. On top of these changes, you will notice a boost in your energy level straight away. In my job I need to lift a heavy weight several times a day and I noticed that after losing just eight pounds of flubber that the regular weight I lift seemed a lot lighter. Quite possibly, for every pound you lose, you can lift an extra pound. That’s the way it feels to me anyhow.

Okay, so just to make things a whole lot more complicated I’m going to add a few twists and turns, tweaks if you like to this already very very successful program. The first thing I’m going to introduce is another rapid reduction method that is also a proven stand alone, time tested and trusted dead cert fail safe system. My name for it is Balls! And yes you can do this in the privacy of your own home, if your Doctor says 'yes'.

The next little tweak that I’m going to make is to introduce a third method, which is based on the Doctor Hays food combining technique. I first came across the idea in Italy, where they actually had something quite different, that they called the separation of tastes. I liked the way that they served many small courses in the restaurants and that each one was a different food. A meat course, a fish course, a pasta course, etc.

Moving on, the next twist I’m adding in to the equation is a little something that I nicked off my Buddhist friends. They tell me that they only eat from sunup till noon each day and then they fast. So I’ve adapted this to suit my lifestyle and the way I use it combined with the other methods I have mentioned. I simply say that if I am going to breakfast at seven am, then I will need to stop eating by seven pm the day before. In effect from seven in the evening till seven am the following morning I am fasting and then at seven am, I break my fast with what people tell me is the most important meal of the day, breakfast. How simple’s that?

The next little turning of the tables in my favour is going to be the compilation of all this knowledge. Everybody I meet tells me that breakfast is the most important meal of the day, so not only is it the breaking of a twelve hour fast but also it is the time when you need to take on the fuel to carry you through the day. I haven’t worked out a percentage figure for this one as yet but it is going to be high. Something like forty-five to fifty-five per cent of your daily calorie intake, perhaps. I noticed that when we eat at three pm instead of six pm I don’t feel hungry later on, but when we eat at six pm or later, I just want to keep on snacking till I go to bed. How mad is that? So on top of the high percent breakfast I think that a main meal lunch would suit me best, leaving only a few percent of calories for an evening meal. Just a thought.

I recently discovered that some sorts of tea can play tricks on the mind to make you not want to eat. Of course the Chinese have known this for centuries and every now and then you'll see an advert for some kind of herbal tea diet. I had never given them much thought before, imagining that they would probably taste foul etc. And anyway, you have to pay for that sort of information and I'm not that daft am I? I'm not really a tea drinker, I think it's the way that it's usually served in England, with milk, that puts me off. When Nicola started drinking herbal teas about a year ago, I steered clear. That is until I ran out of coffee last week. So, I tried one of her mint teas, with two sweeteners in it. Delicious! I liked the taste so much and the effect it has on me, offsetting any hunger pangs, that I decided to include it in my Mad Weight Loss Program!

Eight hundred million people do not have clean or adequate amounts of drinking water and in the west we literally pour millions of gallons of drinkable water down the drain every day. But even in Britain and America where we have clean water on tap for the most part, millions and millions of people are walking around dehydrated. If you don’t drink at least eight 10oz glasses of water a day, you’re probably one of them. What’s going on?

STAY TUNED
DON'T TRY THIS AT HOME!
Okay, right! This is what's happening - I've been to see Docter Dreama, and he has given me the orl kleer to start a mad diet.
Diet? You? I hear my six regular readers scream. You don't need to go on a diet, you've already done that, remember? Well er, yes I do and yes I did, the trouble is no one believed me.
But you did do it didn't you?
Yes, I did it! but I didn't have any photograhic evidence.
You did, I saw the 'after' photo!
I know, and that's the problem, everybody saw the 'after photo' but not the 'fat photo'.
But how can you do it all again?
Simple, you see since last christmas I've been actively piling on the pounds to the tune of a couple a week.
So you're really fat again, that's mad!
Yes, it is total madness and between now and next christmas I'm going to lose all that blubber again!
When you say next christmas do you mean the one coming up in ten or twelve weeks?
Yes!
That is MAD!
Exactly, and that's why I'm saying DON'T TRY THIS AT HOME!
COMING SOON
FAT PHOTO
LOSE THE WEIGHT FIRST THEN GO ON THE DIET!
THREE THINGS YOU NEED TO KNOW (ABOUT LOSING WEIGHT)
BALLS THE ULTIMATE EXERCISE
THE CODOLOGY OF QUICK WEIGHT LOSS
AND MUCH MORE...